If you still have an old surface-mounted fitting in the shower, with just a vile, dangling hand shower, showering is not exactly the highlight of the day. But do not worry, we have a solution. Complete systems for the shower offer the advantage that you can comfortably convert your old shower to a new shower system, including an overhead shower, without having to transform the bathroom into a construction site. Complete Shower Systems are available with faucets and water-bearing shower rails, which direct the water up to the shower head. The best thing about it: you only replace the existing faucet and shower rail with the new shower system and that way you can enhance the shower with only a few holes, but without having to tear open the wall or the need to create a new line.

Even if you want to keep your old faucet for nostalgic reasons the situation is not hopeless: There are also shower systems with diverter that are easily connected to an existing shower mixer via tubing. The switch between hand shower and shower head is then simply done by the shower rod. That way you basically just replace the shower bar and get an entirely new, luxurious shower experience in the blink of an eye. When choosing the shower system do not only consider the price, but also the equipment, because the bigger the shower head, the more fun while showering, and a thermostat always provides more comfort than a normal single-lever mixer. We look forward to your order!
Page 1 of 9
Items 1 - 20 of 168 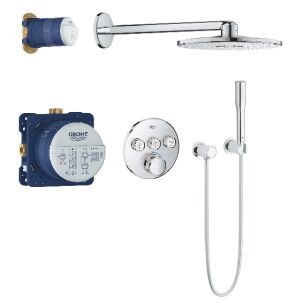 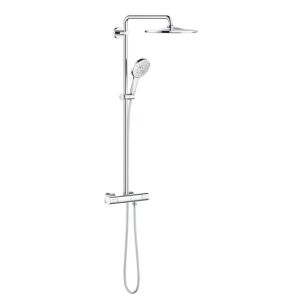